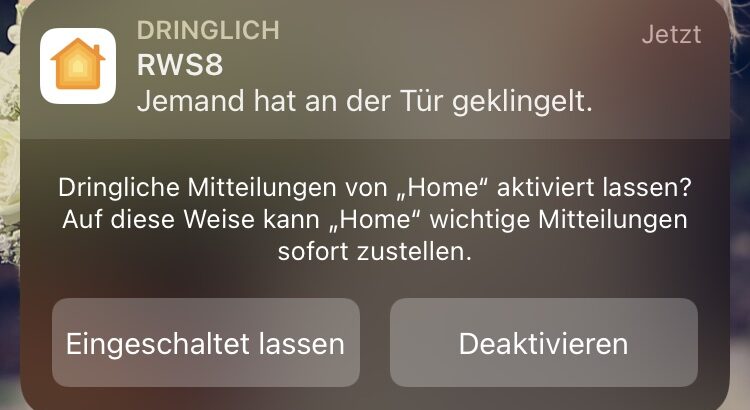 As preparation for our upcoming house, I have to decide and clarify several things. One of those is the question if I need a separate bell or use my existing one when installing an yet to be defined doorbell. Luckily it is possible to ring a doorbell on Homepod running via HTTP request. Okay, to be fair, it’s no direct request, instead I use homebridge to connect custom things with Homekit. This post is a small note how to let your Homepod ring.

Since I’m already using the plugin homebridge-mqttthing, I checked if it supports accessory type doorbell. According to the documentation it does, but in Apple’s universe there is no doorbell without camera. That’s why adding a doorbell alone is not valid. Not sure why it’s mentioned in the docs since the first GitHub issue from its repository reports the accessory doorbell as not working.

Instead I accepted the limitation of having a doorbell with camera – at least that’s what I tell Homekit 🤫. The plugin homebridge-camera-ffmpeg is used to add (almost) any camera to Homekit. Additionally, you can add motion or doorbell to the camera. Luckily Homekit does not care if the camera stream is working, it’ll show broken stream as offline and still accept notifications from doorbell. The plugin also allows to start an internal webserver to send commands to the doorbell (or motion) trigger. Add this to your homebridge config:

Now send a GET request to „http://your-homebridge-host:8080/doorbell?Fake%20Camera“. You should both get a notification and hear a sound on all your Homepods. You can configure the Homepods that should play a sound. Et voilà!

Note: I also found the plugin homebridge-http-doorbell-v3, but it’s probably having the same issue as the MQTT plugin (in fact, it’s mentioned in the known issues, although according to the description, it should work). Moreover, it’s less maintained so I’ll be using the ffmpeg plugin – except there is a specific plugin for my future doorbell.