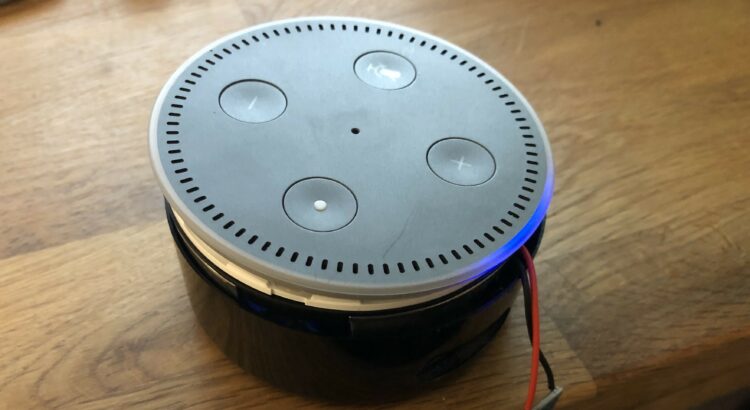 What a time to be alive! Smart stuff everywhere. Your television, the light, temperature – every day the amount of „smart“ things increases. First they were controlled with buttons. Nowadays you can use an app for almost everything. The next step? Of course – your voice. Every „big player“ has its own voice assistant. The problem of all those assistants is, that they claim to require internet to work. Thanks to companies like Snips you can show that this is not true as the whole recognition and most of the actions work without any internet at all. I build an offline smart speaker with a Raspberry Pi 3 A+ and Respeaker 4Mic-Array which is working really nice. The only problem in this setup is the super-low WAF 😄.

According to statistics, Amazon has a market share of over 50%. The designers from amazon did an amazing job – high WAF, appreciated. You can buy an echo dot, which is a tiny box. Depending on its generation it has several microphones, LEDs, buttons, a speaker and rotation input. I was able to get some cheap „broken“ 2nd gen dots. Thanks to several teardowns the main parts are already well known:

There are some unknown ICs, but let’s ignore them for now. I searched for a GND pin and measured every testpoint on the top board which holds the microphones and LEDs. The bottom mainboard uses a DAC to connect to a speaker. Let’s skip them for now, too. This is what I found on the top board:

Also I used a MAX98357 I²C sound card with integrated amplifier. Since the Dot exposes its speaker pins within the case, the access was really easy. I can listen to music via my Dot. Only the microphones are missing. The ADCs have to be powered with 1.8V – where I don’t have capable supply. I ordered one and have to wait for them. After that I’ll try to access the microphones. Maybe I can really use them with Snips. We’ll see.

Or – even better – did anyone ever do this? The only results I get searching for this is how to install Alexa on your raspberry pi…